For almost 60 years, IFMSA has existed to bring together the global medical student community working on global health issues. Hundreds of activities are planned, designed, and carried out every year on the local, national and international levels.

Projects, conferences and workshops are organized across member countries in the fields of medical education, public health, reproductive health, gender issues and human rights and peace, thus of fering medical students a taste of the real and press- ing health issues worldwide.

The IFMSA experience shows students that they are not passive subjects in a rapidly globalizing world, but are valuable individuals with a potentially powerful role to play in global health. They learn that their idealistic goals can be achieved with readily attainable knowledge and commitment. In IFMSA, the emphasis is placed on students returning to their local environments with new ideas and the skills to implement them. As the doctors of tomorrow and future leaders of health, we feel confident that our students will carry this spirit with them throughout their professional lives.

Objectives
— To expose all medical students to humanitarian and global health issues, providing them with the opportunity to educate themselves and their peers;

— To facilitate partnerships between the medical student community and international or- ganizations working on health, education and medicine;

— To give all medical students the opportunity to take part in clinical and research exchange around the world;

— To provide a network that links active medical students across the globe, including student leaders, project managers and activists, so that they can learn from and be motivated by each other;

— To provide an international framework in which medical student projects can be initiated, carried out and developed;

— To empower and train medical students to take a role in bringing about the necessary changes to improve the health of all people of the world.

This structure enables IFMSA to do global work on a local level: Think Globally, Act Locally!

IFMSA consists of national medical student associations of 127 different countries. Each National Member Organization has its own identity, reflecting the national needs and culture.

IFMSA as an umbrella organization embraces 137 national and local organisations in 127 countries on six continents.

Some countries such as Spain have two member organisations in IFMSA since Catalonia has a locale organisation, AECS, whereas the rest of Spain is organised under IFMSA-Spain. Other counties such as Brazil have two national organisations that are both members of IFMSA. 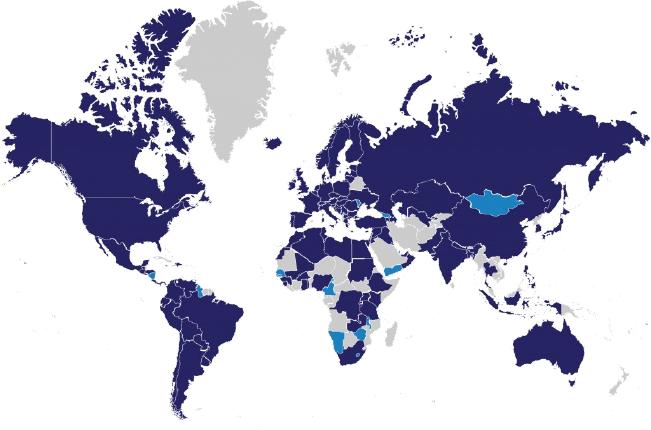 Our biannual international meetings are a feast of crosscultural interaction and education. By meeting the most active students from other coun- tries, our members not only learn about global health, but share their ideas, skills and experience on how students can act on issues that motivate them. A host of regional and national meetings make these experiences available to many more.

Our emphasis on training supports capacity building within our member organizations, bring- ing benefits for the student leaders and the up and coming younger generation.